Stories are like buses; nothing comes along for an age and then suddenly several anthologies at once. I have another one coming out soon but first let me introduce you to WAM Bam, a story I wrote for Goodbye Moderation: Gluttony. It’s is like nothing I’ve tried before.

Goodbye Moderation: Gluttony is a collection of stories about the real side of love and lust 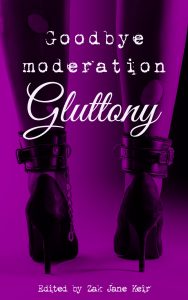 Nothing succeeds like excess, and too much is never enough…

In a world where indulging our appetites is too often seen as a bad, selfish way to live, this anthology offers delightfully wicked stories of people feasting unashamedly on pleasure.

Goodbye Moderation: Gluttony is a collection of 12 short stories written by a variety of authors including Jordan Monroe, Annabeth Leong and Elna Holst. It is published by Sexy Little Pages and has been edited by the brilliant Zak Jane Keir.

The story I wrote for this anthology was inspired by a guy I met once. We dated a little but it didn’t turn into anything. You can read more about him here. 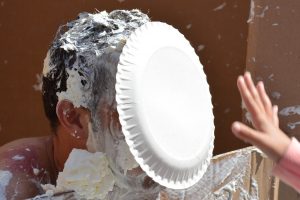 That guy, who for blogging purposes I named Peter Wang, was a big fan of Wet and Messy Play, also known as WAM or Sploshing. For him the biggest turn on was the idea of being gunged while people laughed at his humiliation. While this story doesn’t go in that direction it does bring in the idea of teasing someone with whipped cream, shoving frosting in places it isn’t used to going and the excitement of trying a fetish you never considered before. For love we can do the things that we once thought impossible. I now live with a snake for goodness sake!

Back to the Story

But this story isn’t about me or about Peter Wang, it’s about the sacrifices you might make for love. It’s about the fear that goes with trying something new.

Will Josie go through with it or will her relationship come to a sticky end?

Give yourself the chance to read something new. What could be more gluttonous with Christmas and Thanksgiving around the corner than a bit of WAM?

To buy the book or find out more about it click here.

“What’s in your hand?” he asked, in a trembling whisper.

“Don’t you recognise squirty cream when you see it?” she asked, delighting in the way his whole body juddered when she attempted to spray some on her finger. Unfortunately, she must have shaken the can too much – or not enough – because, as soon as she pressed down the nozzle, it splatted everything within her vicinity. “Damn, that was meant to be sexy.”

“It was,” he replied with a gulp, barely noticing the cream sinking into carpet.

Giving it a quick shake, she squirted it again. The cream plopped onto her finger, the smell of sugar hitting the air instantly. With a cheeky grin, she sucked her finger dry, fixing her eyes on Paul. The reward for her initial foray into the afternoon’s entertainment was his open mouth and reddening face.

“But,” he stammered, before clearing what sounded like a building site of gravel from his throat, “why do you have it?”

Dropping her voice, she teased him into her confidence. His eyes widened at each word of her plan. But suspicion remained, drawing his eyebrows together and pursing his kissable lips.

There was something else demanding her attention. As she spoke, he neared her, revealing a masterful tenting in his shorts. She’d been lucky enough to become well acquainted with his cock over the past five months. It was perfect; not too big, not too small. She felt like Goldilocks when she got to taste it for the first time. It was just right.

The vehemence of his erection at her intentions caused a different sort of reaction. Warmth spread around her sex. Desire had sneaked up on her and, in response she fluttered her eyelashes, offering him more of her temptations.

Paul rarely failed to get a hard on when they were together but, today, he looked like he was fit to burst.

“And what happens to whoever wins Battleships?” he asked, as she finished sharing the planned delights of their afternoon.

“It’s a surprise. But you’ll love it, or maybe I will,” she winked, with a teasing grin.