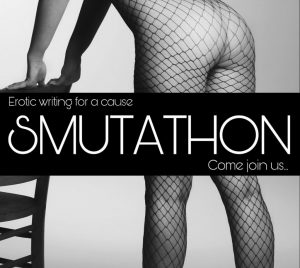 Smutathon is today! The aim this year is to raise money for Endometriosis UK. Smutathon is when erotica writers , sex bloggers and adult educators write something smutty for good causes. Endometriosis is a condition where tissue similar to the lining of the womb starts to grow in other places, such as the ovaries and fallopian tubes. It can be extremely painful and debilitating. It’s also a widely misunderstood condition.

You can donate here and read some lovely erotica here.

When one of my friend’s told me that this week she’s been diagnosed with endometriosis I knew that it was time to get writing. What was my prompt? This particular friend calls me her cheerleader, based on some life coaching we had at work. Your cheerleader is someone who supports you and cheers you on in your life. I started with the word cheerleader and here is what happened. Note – one quick story with no editing.

“Go on show me,” Greg shouted from outside the bedroom door.

“I look stupid,” Kate replied, turning to the side before shaking her head and turning back to face the mirror. Pop tunes from her university clubbing days played in the background. Maybe they’ll get me pumped for tonight.

She shrugged at the black and red cheerleading dress. It was so tight it could have been painted on. The outfit started at her shoulders, creating a deep vee at her bust before travelling down and then the dress pleated at her upper thighs. Kate turned quickly making the skirt part of her dress flutter in the air. A flash of red caught her eye. Why hadn’t Greg’s sister, Jan, told her it was a fancy-dress hen do before she’d agreed to go? The regulation cheerleader costume was indecent. Even the red pants that were a little bigger than knickers and supposed to reduce the flesh on show had “sexy bum” written on the back.

“I bet you look stunning. Let me in. I’ll massage your ego,” Greg said before dropping his voice in a way that made her subconsciously clench her thighs. “I’ll massage other things too.”

She’d never normally wear something like this. It wasn’t that she was against a bit of skin showing, but Saturday nights in town were a thing of her past. Greg was the only one who saw her dressing sexily these days. And I’m scared what they’d say about me and my body. Jan didn’t care what people thought about her. Her main aim was to be herself and have a good time doing it. She’d probably accessorise her cheerleader costume with a flashing penis headband and a giant inflatable cock. Maybe I should be more like her.

Kate opened the door, and Greg let out a long whistle. “Fuck me, honey. You look amazing.”

She shook her head again, forcing her high ponytail to bounce in the air. “I’m going to look ridiculous compared to the other hens. All of your sister’s friends are hot.”

“You’re hot,” he pulled her towards the mirror and eased her in front of him. “When I look at you, I know I’m the luckiest man in the world. I got to marry you. You could have chosen anyone, but that day you asked me out at the office Christmas party I knew I would do anything to call you my wife one day.”

Kate returned his gaze in the mirror. He’d said this to her before. She’d been so drunk at that party that she’d finally advanced on him, her crush for two years, and shouted out her request. Her friends had egged her on all night, and eight gins later she’d declared her interest. Now they were married, and they were building up to another wedding. Jan’s was going to be epic, but before that, there was a hen party to get through.

Greg bent down and pulled up one of her black and white stripey socks, securing it above her knee. His lips brushed her thigh briefly before he pulled up the other one. This time his kisses climbed higher. He paused at the edge of her cheerleader pants.

“Hmmm, ‘sexy bum’. I couldn’t say it better myself,” he said hungrily before giving her bum cheek a little bite through her pants.

“I’m nervous about tonight,” she confessed. Greg stood quickly and grabbed her hips, squeezing gently. She rocked her pelvis gently against him. “I don’t know how I’m going to cope with all those women and their excitement.”

“I know, honey. But whenever you want to come home, call me and I will be there.” He planted kisses against her neck. One of his hands dropped lower before slipping under her pleats. Kate held her breath. “And I’ll send you messages all through the night of what I’m going to do when I pick you up. Maybe I need to get you more excited too so that you rival them.”

“Please,” she released it like a breath of longing. Beyonce’s ‘Drunk in Love’ came on her playlist. How many times had they had sex to that song?

He dragged his nails up the inside of her thigh. Kate made a bleating noise that in public would have embarrassed her. He loved that noise.

“Or I could give you a taster of what will happen now,” he said between kisses.

He brushed his hand across her pants. Kate grabbed it as he tried to withdraw it and held it against her. “You’re very hot, sweetie.”

Their marriage was often a game of teasing. Their weekends were spent pushing the boundaries of patience and toying with each other’s wants. Tonight wasn’t the first time she’d dressed up in front of him, although the outfits she wore were usually a little more risqué.

He massaged her pussy through her pants, running lazy circles with his thumb against her heat as he met her gaze in the mirror.

“Don’t stop,” she mouthed. Greg slipped his hand inside her cheerleader pants, and she gasped when she felt the skin on skin contact.

“I love it when you’re wet for me,” he stated before rubbing her clit. He worked faster this time. His finger was rough, and she moaned at the friction. “Tonight, when I pick you up, I’m going to do this to you in the alleyway next to the club. I’m going to stand you in front of the security camera and put a show on for the security guards who will check the footage. How do you feel about that?”

Although anxious about showing her skin, he knew there was one time she was happy to perform. She insisted on exhibitionism when she was drunk and horny. He usually stopped her in anticipation of her embarrassment when sober, but a couple of times she’d gone down on him in car parks in nearby cities and once when camping they’d sneaked to the beach at midnight and fucked quickly. The sand in awkward places had been worth it for the rush. She hadn’t regretted any of their experiences, and they’d talked the other night about pushing the boundaries. But sex near their home with people they knew in the building was something new.

“Do you like the sound of that?” he asked as he eased a finger inside her. She moaned quietly. His smile was against her neck as he kissed her again. What did they say about men? That they couldn’t multi-task? Thank god that was an old wives’ tale.

She knew he was right. In this position, she usually struggled to orgasm, but it didn’t stop her opening her legs wider.

“Then I guess you’d better hurry up,” she replied, a Cheshire cat smile across her face.

He squeezed her hard nipple between his fingers, causing her to shout out.

The dirty beat of the music was a soundtrack to her moans, and her musky scent filled the air around them.

His fingers pumped quicker as if he was responding to her haste. Greg’s kisses against her neck became little sucks and bites. Was he marking her as his and warning off other guys tonight? She smiled at the idea. With each passing second, her need for release grew, and she moved her body in rhythm with his fingers willing her climax closer. She was panting his name now. Sweat beaded her forehead, and she splayed her hands against the cold glass of the mirror.

“Everyone is going to see me fuck you,” he growled as she ground against his fingers.

“All the men are going to want you tonight.” He grunted loudly. She’d avoided kissing him for fear of smearing her makeup. But I don’t care anymore. She turned to feast on him, something that would help her closer to the edge if not over it.

Her orgasm was so close. One more minute was all she needed. The song filled her limbs, and her arms started to tremble in anticipation. She could go on her night out satisfied.

The doorbell rang as her phone bleeped with a flurry of messages. Women screamed outside the front door.

“Fucking hell,” she screamed in annoyance.

Time was up, but the night had just begun.