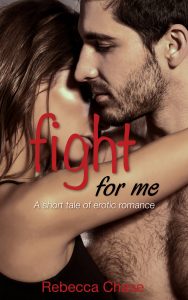 Although you can find Fight For Me in the Crave For Me anthology I decided it was time it got its own release. I remember sitting down to plan this book out on a cold November night in a quiet cafe. It wasn’t the obvious setting for an erotic romance brimming with love but that didn’t stop me. When I was younger I was too shy to talk to the guys I had crushes on. During my teens and 20s there were several crushes that made my palms sweaty and my face beetroot red. Unfortunately it never went further. The inability to flirt, even chat to guys I had crushes on inspired a lot of my writing, including this story.

But that wasn’t the only inspiration.

You’ll see from my A-Z of Online Dating blog posts that I’ve had some good and bad dates. One of the good ones, that will feature under H is for Heartbreak was Mr Fumble. He was a squaddie that broke my heart but he also made a massive impact on many things, including my imagination. That was where the inspiration started.

But it needed somewhere else to go. I have always had a love of stories where females fall in love with their brother’s best friends. But I can’t explain why. I had lukewarm feelings for several of my brother’s friends when I was younger but none of them stood out. None of them captured my lust, brought me joy or made me laugh like the male protagonist in Fight For Me.

Joe is a hot and cocky yet endearing and humorous soldier who our female protagonist Jules has always fancied. Although she has successfully avoided him for years, when she realised he could never be the man she wanted, she has continued to love him. The rumour among her family was that he couldn’t get leave from the army for Jules’ brother’s wedding. But would he really miss his best friend’s wedding or the chance to see Jules again?

Let Joe be your new book boyfriend. I’m certain I wouldn’t be able to resist him.

You can buy the book by clicking on this link or any of the links on my books page.

Please enjoy the excerpt below and tell me, have you ever had a kiss like this?

“I see you have no wedding ring. Are you here alone? Always alone aren’t you, Pencil? It seems to suit you well. No friends, no husband, no nothing.” Freya and Annabella giggled next to her, the monster was laughing in her face once more.

Say anything, get the fuckers back with your words. She opened her mouth but all that came out was a barely audible squeak. They cackled in response.

Hands suddenly found her hips, gripping tightly, their strength easily turning her shocked body around, before soft lips brushed against hers. Her eyes fluttered closed in the pleasure of the moment. It was a graceful, gentle kiss at first but quickly escalated into a needy, passionate embrace. Jules had no idea who the man demanding such heat was and she was reluctant to open her eyes and find out. This was a kiss of longing and she was drowning in it.

The stranger pressed his strong firm body against her swollen breasts. For a second she questioned what she was doing, but any reluctance was crushed as she willingly opened her mouth to his sensuous and insistent tongue easing her lips apart. Hands slid hungrily to the flesh of her bottom, squeezing it expertly through her jeans, pulling her closer. There was an unexpected opulence to his touch and she felt a hardness pressing into her that raised her curiosity as quickly as it increased the ache between her legs.

The rumble of the music travelled through each nerve of her body but her senses continued to stay keenly focused on him. His minty breath fought with the mixture of spirits still on her tongue. The smell of musky deodorant mingled with sweat and something almost woody, which caused her nose to tingle as she felt the material of his clothes against her skin. Rough material rubbed against her lower back where her top had lifted slightly, heightening her arousal and making her force him closer. Delicate fingertips found the bristles of hair on his neck and tentatively she stroked them. Who is this guy? That hardness is all mine.

Air was fading from her lungs but she didn’t want to stop. She was unrestrained, controlled by a force beyond reason, as she rubbed mercilessly against his firm straining crotch. The alcohol that had filled her bloodstream brought flushed and heady sensations but still she embraced the arousal that heated her body throughout. A rough tongue massaged hers with expert skill as his fingertips toyed with the hem of her rising top.

I’m almost out of air, I need to breathe. Hands climbed quickly, sensing a rearing of her head, pressing a little harder against her neck, as if he wasn’t ready to let her go. I want this kiss more than I want to breathe but I need to know who is bringing me to these heights. It could be anyone. What if someone is playing a joke on me?

Jules’ green eyes fluttered open and took a moment to focus, searching through the slight fuzz of alcohol that still clouded her pupils. Oh my God, it can’t be. As if her memories had synchronised to stab her in her heart while playing cruel games with her senses, she realised she was looking at the one man she thought she’d successfully avoided for life.

Joe was home and she was in his arms. Shit!

“Alright, Jules? Just follow my lead,” he whispered in her ear, before giving her one of the signature cheeky grins she’d missed.

“Sweetheart, I’ve found you. Sorry I was late, you know what the army is like. There are always people who need rescuing.”

Words failed her. What the hell is he doing here? And what the fuck was with that kiss?